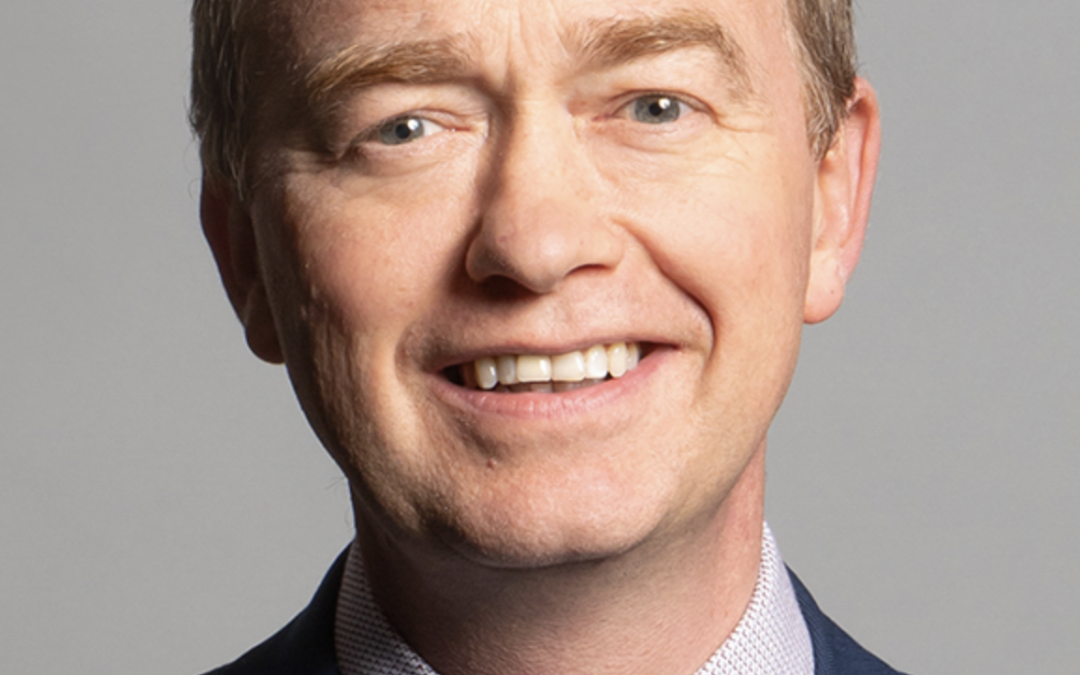 Our first interview is with the MP for Westmorland and Lonsdale, Tim Farron.  Mr Farron is member of the Liberal Democrat Party.  He was first elected in 2005 and was the first non-Conservative to win that parliamentary constituency in over 95 years.  He and his family live in the village of Milnthorpe in south Cumbria

In 2010, he was elected President of the Liberal-Democrats and then re-elected in 2010.  The year 2015 saw Farron become the Leader of his party.  He stepped down in 2017 after a very public dispute with the most progressive wing over his lack of support for the Bible’s teaching on sex and sexuality

The statement he made when he resigned was very insightful.

“From the very first day of my leadership, I have faced questions about my Christian faith.  I’ve tried to answer with grace and patience.  Sometimes my answers could have been wiser.

“At the start of this election, I found myself under scrutiny again – asked about matters to do with my faith.  I felt guilty that this focus was distracting attention from our campaign, obscuring our message.

“Journalists have every right to ask what they see fit.  The consequences of the focus on my faith is that I have found myself torn between living as a faithful Christian and serving as a political leader.

“A better, wiser person than me may have been able to deal with this more successfully, to have remained faithful to Christ while leading a political party in the current environment.

“To be a political leader – especially of a progressive, liberal party in 2017 – and to live as a committed Christian, to hold faithfully to the Bible’s teaching, has felt impossible for me.

“I’m a liberal to my finger tips, and that liberalism means that I am passionate about defending the rights and liberties of people who believe different things to me.

“There are Christians in politics who take the view that they should impose the tenets of faith on society, but I have not taken that approach because I disagree with it – it’s not liberal and it is counterproductive when it comes to advancing the gospel.

“Even so, I seem to be the subject of suspicion because of what I believe and who my faith is in.

“In which case we are kidding ourselves if we think we yet live in a tolerant, liberal society.

“That’s why I have chosen to step down as leader of the Liberal Democrats”.

When the EC spoke with Mr Farron, we found him to be a warm and clear-spoken man with a real sense of calling to serve as an MP.  His understanding of what he termed, “true Christianity” is tied to his understanding of the grace of God.

“True Christianity is counter-cultural—always has been—and it is all about grace—God’s unearned favour that you’ve not worked for means you’re not your own master’.

He is of the conviction the Christian faith is very reasonable but that people take offence because they don’t like anything that disturbs them or tells them they are wrong.

Farron also believes that honesty and integrity in public office holders are key factors that have been largely missing in much of public life both in government and the church.  He said, “we’ve almost got to the point where there’s little accountability”.  He went on, “All lead by example—either good or bad”.

He thinks JKA Smith’s book, ‘Awaiting the King’  offers a pretty good explanation of the current situation.  Farron said in one portion, “King refers to ‘western liberal democracies bearing the crater marks of the gospel’ and agreeing explained; “even though we may not largely be a Christian country today, our values, norms and institutions are nevertheless based on a Christian world view: justice, grace, personal responsibility, care for the needy, the knowledge that if people are sinners then you don’t want power concentrated in the hands of too few of them!  The ‘crater marks’ point is more that as we move away from Christianity, then those marks will become fainter and fainter until such point that integrity may matter less and less”.

When asked about what he sees as the next big moral issues facing the nation he was quick and to the point:  1.) “the effort to decriminalise all abortion up to the point of birth”; and, 2.) “assisted dying”.  He does not believe that the former will find the support necessary to be approved by parliament and that assisted dying will be a big battle.

He is of the persuasion there is tendency by opponents of assisted dying to talk and argue in the abstract about the question, rather than addressing the matter with Christian compassion.  In his view, part of the problem is the way people understand palliative care, the debate being over whether or not assisted dying and palliative care are one and the same.  He believes that Christians must engage in the debate over the matter and fears that without compassion, “we will lose the argument”.

Being a Liberal-Democrat, Farron sees the State being more involved in every day life more than those of other parties. He also believes that the government “has stepped into roles in a reactive way” rather than being proactive. He sees himself as being in the tradition of the original Liberal Party which he termed the “Evangelical Party” owing to its founders roots in the various non-conformist, evangelical churches.

Farron is a regular attendee at his local church and participates in bible study groups made up of other Christian MPs when Parliament is in session.

Whistleblow & the Sheep-Guarders, A Parable