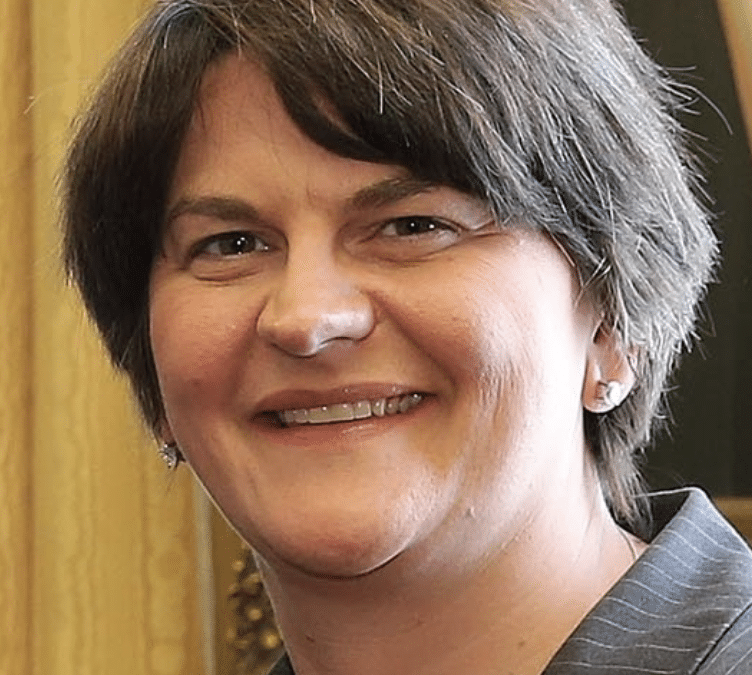 The Rt Hon Arlene Foster is one of those rare people in public life that in her home patch is known by one name.  In Northern Ireland, her first name suffices.  There are other women with the same name but there’s only one, Arlene.  She has been in public life the majority of her fifty-one years.

She was born in County Fermanagh, Northern Ireland and still lives there.  It is the most westerly location in the UK. Married for over 25 years to her husband Brian, they have three children.  From December of 2015 until the end of May this year, she was the Leader of the Democratic Unionist Party and along the way served two stints as First Minister of Northern Ireland.  Stepping down on 14 June of this year, she was the first woman to hold that office.  Mrs Foster was first elected MLA for Fermanagh and South Tyrone in 2003 and will be leaving office in the near future.

The MLA from Fermanagh & South Tyrone has known great adversity.  During the Troubles, her father survived a murder attempt by the IRA.  This necessitated the family moving to a safer location.  Later, in 1988, the school bus on which she was riding was blown up by an IRA bomb in an attempt to kill the driver, Ernie Wilson.  Mr Wilson was a part-time UDR soldier and was credited with saving an injured girl’s life. The injured girl was Arlene’s seat mate and was severely injured but everyone on the bus survived.

Still a practising member of the Church of Ireland, Mrs Foster credits her Christian faith with giving her the understanding that, “you are never alone and that there is a bigger plan at work”.  She continued, “My faith has given me resilience and hope”.  Her faith was shaped by regular attendance in her very traditional home parish.  “I still miss the old service, not just the form, but the content as well”.  The Church of Ireland service she spoke of was almost identical to that of the Church of England’s Book of Common Prayer.

Foster said that leaving home to attend Queen’s University in Belfast was an eye-opening experience for her.  “Growing up in Fermanagh, I thought most Protestants were Church of Ireland but it didn’t take me long to figure out there were more Presbyterians in Belfast than Church of Ireland”.

She continued, “Christians are called to be salt and light in the world and it is pretty difficult, especially for young Christians growing up today”.  She added,“finding space for the Christian point of view in society is also growing more difficult”.  Mrs Foster’s political party, the DUP, is the only political party left in the UK to oppose abortion.

Leaving office means her life will change in heretofore unknown ways.  She was recently hired by GBNews as a contributor and has met with good reviews for her on-camera appearances from the London studios.

When asked by a reporter from the Belfast Telegraph why she was making the move to GBNews she said, “

“First of all I see it as an opportunity to have a space for civilised discussion in a meaningful way, and very often political programmes are very sort of short and snappy and there is not an opportunity to develop stories so that is one of the reasons.

“Of course the second reason is to bring Northern Ireland very much into the mainstream of UK politics and it is something I feel very passionate about and something I thought as a student a very long time ago”.

Toward that end, she was recently appointed as the Chairman of the Castlereagh Foundation and hopes to increase the understanding of Unionism  in the UK through empirical research.

On top of her other efforts, she intends to serve as an advocate for those suffering from the increasing problem of online abuse.