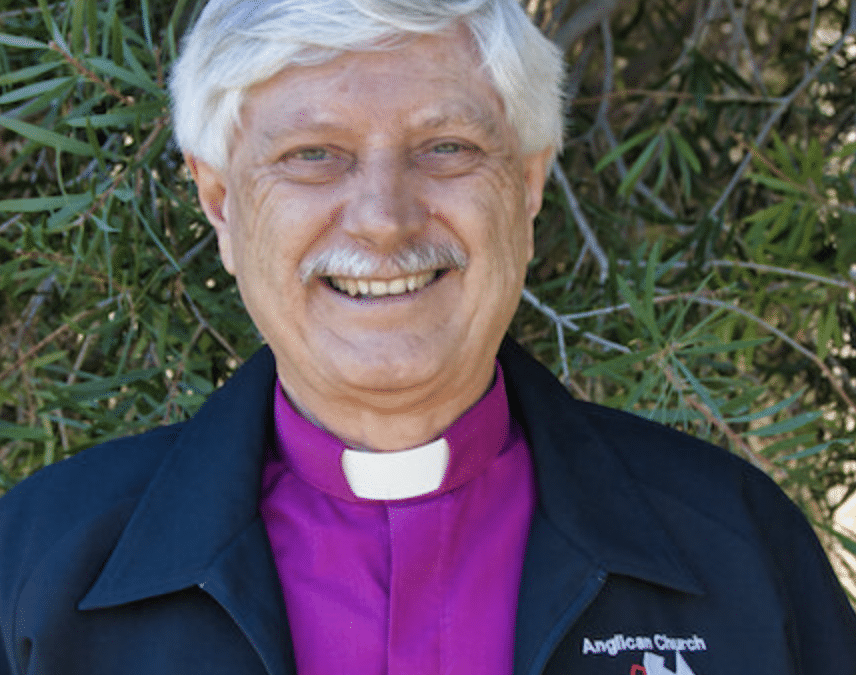 What is slightly smaller than the combined area of the United Kingdom, Ireland, France, Spain, Germany, Italy, and the January average temperature is 37°C, and has just one Anglican bishop?  Answer, the Diocese of North West Australia at 2,000,000 sq km.

There are two other Anglican dioceses that are larger in area, Diocese of the Arctic in Canada (4,000,000 sq km) and the Diocese of Europe, which has congregations for expat English speakers from Iceland to Mongolia but is mostly located in Western Europe.

The Rt Revd Gary Nelson has been the lone bishop of the world’s 3rd largest geographical Anglican diocese for over a decade.   The diocese has 14 parishes, three Mission to Seafarers locations, and Prison ministries spread from Geraldton (424 km north of Perth), all the way to Kununurra which is 2,900 km north east.  Western Australia has about 2,600,000 people and 2,600,000 sq km land area.  Approximately 2,000,000 people live compactly in the Perth metropolitan area’s 6,400 sq km.

The Diocese of NW Australia is an old school reformed Anglican entity.  Its website is as clear as spring water.

“We’re a conservative evangelical diocese committed to the gospel and the ministry of the Bible as the word of God.  We seek to know Jesus Christ as Lord and Saviour and make Him known through the North West and beyond.

“As Anglicans, we believe in the theology of the Book of Common Prayer and adhere to the doctrinal basis of the 39 Articles.  We’re also committed to the Jerusalem Declaration as a contemporary expression of our theological beliefs”.  The diocese is also a member of GAFCON.

In regard to salvation, they hold to the five solas of the Reformation: sola Scriptura, sola Fide, sola Gratia, Solus Christus, & soli Deo Gloria—by Scripture alone through faith alone, by grace alone, through Christ alone, and to the glory of God alone.

Bishop Gary sat down via Zoom with the EC to talk about the diocese he’s been privileged to lead for most of this last decade.

“One of the most difficult things for us is to find personnel.  It is very hard for us to recruit clergy here but it has always been so.  North West Australia is not the leafy suburbs of Sydney and it is a continent away, so recruitment is a challenge”.   At present, there are still parishes needing clergy including the Cathedral of the Holy Cross in Geraldton.  The last dean, Peter Grice was elected Bishop of Rockhampton.

Iron ore and other mined minerals are the chief products of the region.  It is estimated that one-third of the annual GDP of Australia leaves on container ships via Port Hedland alone.  There are two other smaller mineral export harbours.  The bishop explains, “iron ore is the largest driver of the economy and really keeps things rolling along even in the midst of the pandemic”.  It has helped that iron ore prices have remained on the increase over the last 18 months.

Nelson, a warm-hearted and clear conservative, is very pleased that numbers of attendees are increasing but is resigned to the cyclical nature of church participation in a region where few come to stay more than a few years before rotating home.  Even with that for now, “Kununurra has almost doubled in size  and Kimberley and Bluff Point are growing quite well too”.

The lockdowns instituted by the various Australian state governments during the Pandemic have added to the normal difficulties of getting personnel to the region.  “Not only are clergy in shorter supply but so are tradesmen and employees for the mines”.

Prior to ordination, Nelson and his wife, Christine served as missionary teachers in Papua New Guinea. He did his undergraduate work at Sydney University before going to Moore Theological College for seminary.  After a number of years as Rector of Panania in Sydney Diocese, Nelson became the Director of External Studies at MTC in 2006 and remained there until elected bishop in 2012.

Like so many from Sydney Diocese, he counts the late Irish cleric and professor, TC Hammond amongst his greatest influences.  Hammond’s work, In Understanding Be Men was of seminal influence in regard to shaping the character of Sydney Diocese as well as not insignificant numbers of clergy in the Churches of Ireland and England.