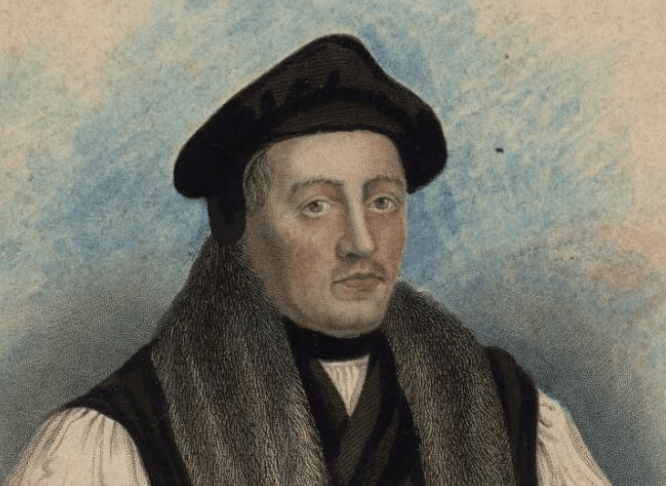 So why were Reformation churches divided? What separated Luther from the other reformers and why couldn’t they just get along for the sake of the Protestant witness? It was because they agreed on virtually everything except for one big thing: the nature of the Lord’s Supper (the meaning of the Latin phrase hoc est corpus meum, “this is my body”).

The “Marburg Colloquy” October 1-4, 1529 brought Martin Luther and Ulrich Zwingli together with a few of their friends for the purpose of uniting the principals of the early Reformation. Although there was agreement on 14 of 15 articles of Christian belief (Marburg Articles), the meeting is remembered for what it failed to accomplish: “We have not been able to agree at this time whether the true body and blood of Christ are corporeally present in the bread and wine.” Luther believed that Christ is present at every celebration of Holy Communion – although he was never too sure about what happened to the bread and wine in Holy Communion. Zwingli believed that the communion service was a commemoration of Christ’s sacrifice and that the bread and wine were purely symbolic. Hot-headed Luther reportedly refused to shake hands with Zwingli when the conference ended.

Thomas Cranmer came to the evangelical faith a bit later in the Reformation and he obviously did not attend the Colloquy, but he (and John Calvin) settled on a middle way between Luther and Zwingli. Writing in the Book of Common Prayer, the Articles of Religion, and at length in a treatise “A Defense of the True and Catholic Doctrine of the Sacrament” (written in 1548 and published in 1550),  Archbishop Cranmer said that Christ is spiritually, not corporeally, present in the sacrament because his “body” ascended to heaven where he is today interceding for us. And furthermore, said Cranmer, the grace of the sacrament is received in the hearts and affections of the faithful recipients. Jesus is really present in the Eucharist, not in the bread and wine, but in the renewed hearts of Christians who meet him by faith at the Lord’s Table.

In a new and important essay, Ashley Null discusses his work of recent years on Thomas Cranmer’s commonplace notebooks on the eucharist. He shows how the church fathers, and notably Cyril of Alexandria (c. 376-444), deeply influenced Thomas Cranmer’s understanding of what happens in Holy Communion. Cyril, in his eleventh anathema against Nestorius, maintained that Christ’s humanity and divinity cannot be separated as Nestorius did when he talked about Jesus’s humanity on the earth while his divinity continued to fill the heavens. Cyril then went on to apply his Christology to the undivided Christ in the Eucharist, and Cranmer picked up on this.

Cranmer taught that, because Christ bodily ascended to heaven where he remains until the day he will return to bring heaven to earth, he is spiritually present in Holy Communion for those who receive the grace of the sacrament by faith. In addition Cranmer understood that, since Christ cannot be separated body and spirit, Communion reunites us to the whole Christ, body and spirit, in heaven. If we were baptised with him into death and raised with him in his resurrection (Rom 6) to be seated in the heavenly places in Christ Jesus (Eph 2), then the one time miracle of union with him 2,000 years ago and the opportunity for reunion with him in the Lord’s Supper helps us understand the meaning of Communion. Cranmer believed two things in tandem: that Christ is spiritually present in the Eucharist, and through faithful contemplation we are reunited with the whole Christ in heaven by the power of the Holy Spirit. Dr. Null writes, “The sacrament’s proper focus was not the transformation of the elements, but of the human will, by means of union with Christ through spirit-empowered faith.”

The Revd Canon Chuck Collins is the Director of the Center for Reformation Anglicanism.  See more at: www.anglicanism.info.

Readers of the English Churchman