Catholic or Protestant? by Chuck Collins

by EnglishChurchman | Dec 3, 2021 | Church in Wales, Church of England, Church of Ireland, Columnist | 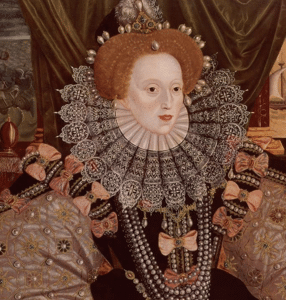 When Queen Mary died on 17 November in 1558, she was succeeded by her half-sister Elizabeth I. November 17 was named as Elizabeth’s “Accession Day” and this holiday was celebrated with great pomp every year of her 44-year reign as queen (1559-1603). The Church of England had been independent from Rome since 1534, but Catholics in England and around the world were ever hopeful that Henry VIII’s successors would see the error of their Protestant ways and hobble home. But the train was already out of the station when Mary became queen and she was unsuccessful in her attempt to return the church in England to Roman Catholicism and papal authority. Bloody Mary, unpopular as she was and in her own way, convinced the English people they would never again be under the tyranny of Rome.

Elizabeth was the last of five monarchs of the House of Tudors. When she took the throne there was every reason to believe that the daughter of Henry and Anne Boleyn would continue the Edwardian religious reforms. She had been educated and cared for by the Protestant Queen Katherine Parr, the English people generally opposed Mary’s forced and oppressive Catholicism, the Marian exiles that included some of the best Reformation minds in the world returned from the continent, and John Calvin and his disciples had risen to prominence in Protestant Europe. But situations change and things are not always as clear-cut as they seem. Elizabeth’s rocky encounter with England’s face of Calvinism, John Knox, was unfortunate, and marked her leadership as Supreme Governor of the Church of England.

Elizabeth’s Protestantism was something of a wax-nose. She was assumed by some to be personally more Lutheran in her thinking, sacramentally and ceremonially, but certainly politically motivated as she steered church and society between the religious extremes of her day. John Calvin pejoratively dismissed Elizabeth as a “Nicodemite” after Nicodemus who, for fear and trepidation, visited Jesus only by night. Historian Diarmaid MacCulloch addressed the nuances of Elizabeth’s personal faith:

“Elizabeth was an evangelical, but of a distinctive and (in the conditions of the late 1550s) an extremely old-fashioned variety. She disliked the marriage of clergy and enjoyed more ceremonial and decoration in worship that her half-brother would have considered tolerable. If we want to place her beliefs, we should do so not in the court of Edward, but at the court of Henry VIII and Catherine Parr in the mid-1540s. This was the era when Elizabeth had first been given a role of dignity, when she became one of the elite of children who enjoyed an exceptionally rich and privileged education. It would not be surprising if those years, and her time in the Seymour/Parr household, became a formative experience for her piety…”

— The Boy King: Edward VI and the Protestant Reformation

But, as MacCulloch writes, the Elizabethan Settlement was not a Nicodemite settlement. Elizabeth landed the Church of England plane decisively into an expression of  Protestantism that is thoroughly biblical, theologically orthodox, pastorally generous, and liturgically beautiful. She grounded the new church on the foundation of Holy Scripture as expressed in the Anglican Formularies that have defined Anglicanism ever since: the Church of England’s confession: the Thirty-nine Articles of Religion (1571), the 1662 Book of Common Prayer (including the Ordinal), and the two books of Homilies. It is not an exaggeration to say that the Church of England, from Edward VI (Cranmer) through Elizabeth (and James I), was substantially Calvinist theologically as reflected in the Anglican formularies. This only began to be challenged in the first quarter of the 17th century with the rise of Anti-Calvinism (Arminianism) and the high churchmanship of William Laud, and the accompanying rise of moralism that has always tempted the church away from the cross-centred gospel of Jesus Christ.

After her long reign as Queen, Elizabeth was buried in a coffin on top of her sister Mary’s in Westminster Abbey with an effigy of Elizabeth.