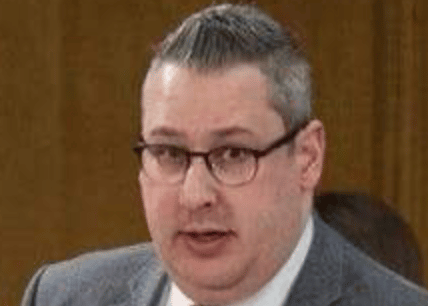 An unapproved change for the Communion Table at St Nicholas’ Church in Leicester has drawn a formal complaint from General Synod Member, Samuel Margrave.

Samuel Margrave wrote to the Bishop of Leicester:

I am writing to formally complain about the use of the altar frontal outlined in the attached tweets.

My complaint thereby concerns St Nicholas Church, the Church Wardens and the incumbent.

The use of this frontal has not been approved by faculty.

Nor do I believe that the Archdeacon has given written permission for this frontal under The Faculty Jurisdiction (Amendment) Rules 2019.

However, the above exemption for an altar frontal to need a faculty would be disapplied due to the political Pride flag being “a matter which gives rise to a question of law or doctrine, ritual or ceremonial or which would, if undertaken, affect the legal rights of any person”.

Save that, this particular version of the Pride flag seeks to remove the protections of women and therefore is of grave concern to the safety of women. The flag itself therefore is promoting politics and policy contrary to the equality act.

The frontal is not using Christian symbols and not in keeping with the Church history or architecture.

Finally, the Earl Marshall regulations in this case. Political flags should not be flown inside a church.

“Tonight we blessed our incredible new altar frontal, a gift beautifully handmade by Margaret from @ASwHTchurch in Loughborough.

“They noticed that our altar frontal was a cheap progress pride flag held on by sellotape and surprised us by making something a little more permanent.

Jay Hulme who tweets @JayHulmePoet described the response by people in the pews at the church when he tweeted,

“This was genuinely a surprise present, and let me tell you, people were actually weeping in the pews when they saw it.

“What a gift.  What an incredible gift.”