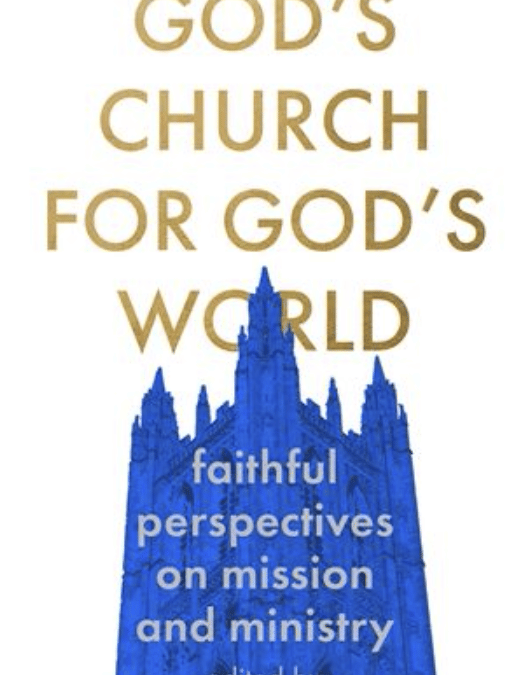 This is an important book which takes a snapshot of evangelical ministry in 2022. The title and cover art (a rendering of Canterbury Cathedral’s crossing tower) sought to capitalise on the eponymously themed Lambeth Conference of this summer. The ‘institutionalist’ overtone thus conveyed hints at a major thread in the book, namely, the continued involvement of evangelicals of various stripes in the wider church. The contributors are carefully chosen from across what might be termed a ‘GAFCON Great Britain’ spectrum, including clergy both male and female, charismatic and conservative, episcopal and presbyteral, ‘mainstream’ and ‘continuing’, English and Celtic. To capture these voices, perspectives, opinions, and positions in such a volume is of use both in the present and to posterity.

The opening chapter, from Andrew Goddard, begins with the author’s honest admission that he was several years into ordained ministry before registering the existence of an Anglican Communion and that he remains on a learning curve as to its significance. Goddard then however knowledgeably narrates the development of the Communion, from its genesis in the differing but similar English, American, and Scottish Episcopal churches, through to the build-up to Lambeth ’22. The changing nature of the instruments of communion is noted, including the twenty-first century challenge presented to those instruments by the ‘tear in the fabric of the communion’ at the consecration of Gene Robinson.

Tom Woolford’s chapter on catholicity is thoughtful. He sets out seven ‘elements of catholicity’, which, if nothing else, is a masterclass in contrived alliteration; canon, creeds, conversation (i.e. Fathers), conscience (i.e. tradition), cultus (i.e. liturgy), connection (i.e. episcopacy and synods), and circumference (i.e. baptismal ecclesiology). Woolford argues that none of these elements ‘compromise any of the fundamentals of the evangelical faith’ (itself defined on a five-solas rather than Bebbington basis). This exercise is sufficiently intellectually capacious that it could form a book of its own, yet, barely pausing for breath, this one chapter also seeks to argue further that the best place for English evangelicals to ‘treasure, protect, and prosper’ the catholic faith is within the Church of England.

The first of these arguments, seeking overall to ‘detoxify’ catholicity for evangelicals, is reasonably successful. Readers may question whether all of the seven elements selected do accurately represent catholicity, but all are undoubtedly of importance in some respect. To whatever extent evangelicals might feel distance with them, anxieties are largely quelled. Sentiments on theological method and liturgical revision are particularly nicely phrased, calling for default postures of reserve in relation to innovations away from the Great Tradition. The section on connectionalism privileges episcopacy over Presbyterianism and slightly straw-mans Congregationalism but is otherwise helpful. Only the section on baptismal ecclesiology feels awry, conceding rather a lot of ground to modernist theology at the expense of a more historic conception of English ecclesiology.

Catholicity having been presented as an evangelical desirable, the second of the arguments is not unpersuasive but is less convincingly presented in so short a span of pages. By their very nature, the seven elements may be found in many churches around the world and, unsurprisingly, to a great extent in several denominations in the UK (not least the Roman Catholic church itself). It would be engaging at some point to hear the author set out in fuller detail why he thinks the Church of England in particular is, for example, ‘deeper into the stream of the Great Tradition’ than other ecclesial bodies in the realm. The concept of the CofE’s breadth serving evangelicals in their own catholic reformation holds much truth, though the mechanics could do with reworking to affirm Christ’s desire for a holy church and to illustrate the involvement of His all-sufficient word in achieving this. If breadth is an unbalanced good, why not re-join Rome?

To coin a phrase, reports of the CofE’s monolithicism and comprehension have been much exaggerated. The very fact that it is independent of Rome testifies to its malleability under the right political and religious circumstances. Moreover, substantial movement has occurred in the centuries since that break, not least during the Commonwealth, under the Victorians, and in the long wake of the Oxford movement. Many of these changes, or retrenchments, have come at the expense of sincere believers often unchurched as a result. Meanwhile, though the Prayer Book, Ordinal, and Articles remain nominally ‘central’, the formal and de facto standards of adherence to them among all ranks, including clergy, has progressively weakened over the past century and a half. Credal orthodoxy, a modern watchword in some quarters, is necessary, but not sufficient.

The chapter concludes with some excellent remarks on pursuing catholicity by evangelical involvement, in which a certain amount of reading between the lines will serve the reader well. Though the tone on missional opportunity seems unduly downbeat and the overall line of argument more theoretical than necessary, the overall result is a happy one. Valuable reading for anyone praying for the nation’s soul.