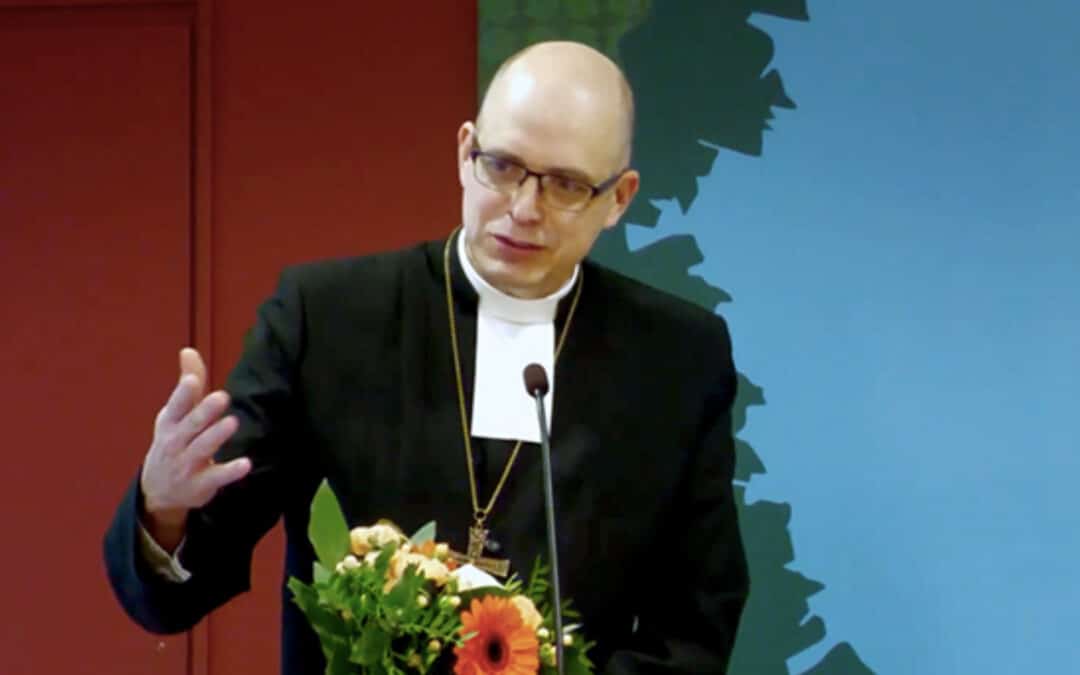 Finnish Bishop-Elect Charged by Prosecutor Over 2004 Booklet Supporting Biblical Teach on Sexuality FINLAND – Rev. Dr. Juhana Pohjola, Diocesan Dean and Bishop Elect of the Evangelical Lutheran Mission Diocese of Finland (ELMDF) has been charged by Finland’s Prosecutor General with incitement against a group of people. The charges stem from a 2004 booklet published by Luther Foundation Finland (the legal entity behind the ELMDF) which articulates historic Christian teaching on human sexuality. “As a Christian, I do not want to and cannot discriminate against or despise anyone created by God,” Dean Pohjola said in reaction to being charged. “Every human being, created by God and redeemed by Christ, is equally precious.” At the same time, he continued, “this does not remove the fact that, according to the Bible and the Christian conception of man, homosexual relations are against the will of God, and marriage is intended only between a man and a woman. This is what the Christian church has always taught and will always teach.” Finland’s Prosecutor General began an investigation of the ELMDF in 2019 for its booklet “Male and Female He Created Them: Homosexual Relationships Challenge the Christian Concept of Humanity,” despite an earlier investigation by Helsinki Police which concluded no laws had been broken. The booklet was published in 2004; Finland legalised same-sex marriage in 2017. The booklet argues that homosexual activity must be identified as sin by the church on the basis of the teachings of Scripture. The author, Dr. Päivi Räsänen—a Finnish Member of Parliament—further argues that a failure to recognise sin as sin undermines the very need for a Saviour. Dr. Räsänen has now been charged with incitement by the Prosecutor General, both for the booklet and for other comments on human sexuality. As Dean Pohjola is editor-in-chief of Luther Foundation Finland’s publications—including the booklet “Male and Female He Created Them”—he also was charged. “This decision of the Prosecutor General says a lot about our time,” Dean Pohjola commented. “While I am concerned about the state of religious freedom in our country, I trust that the judiciary will make the right decision.” The International Lutheran Council has earlier expressed concern about the investigation of Lutherans in Finland for upholding historic Christian teaching. That concern is deepening. “Recent actions in Finland have created an international scandal which continues to grow,” said Rev. Dr. Timothy Quill, General Secretary of the International Lutheran Council. “The implications of the decision to charge Juhana Pohjola and Päivi Räsänen are clear: if the authorities are willing to do this to a respected pastor, reverend doctor, and Bishop Elect, as well as a Member of Parliament and former Minister of the Interior, then that sends a message of fear and intimidation to everyone in Finland who follows the Scripture’s teaching on human sexuality.” “Faithful Christians need to demonstrate solidarity with their suffering Finnish Lutheran brothers and sisters,” General Secretary Quill continued. “We must not be silent but express righteous indignation at the actions of the Finnish authorities and demand an end to the persecution of those who adhere to historic Christian teaching on sexuality. I encourage Christians around the world to pray for Juhana and Päivi, and to follow the example and command of Jesus: ‘Love your enemies and pray for those who persecute you’ (Matthew 5:44).” The ELMDF is a member church of the International Lutheran Council, a global association of confessional Lutheran church bodies representing millions of Lutherans worldwide.